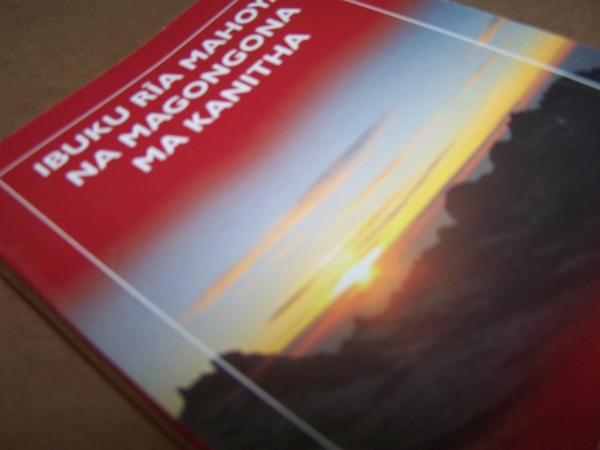 The Anglican Church of Kenya is a province of the Anglican Communion, and it is composed by 33 dioceses. The current Primate and Archbishop of Kenya is Jackson Ole Sapit.

The church became part of the Province of East Africa in 1960, but Kenya and Tanzania were divided into separate provinces in 1970.

The church was founded as the diocese of Eastern Equatorial Africa (Uganda, Kenya, Tanzania) in 1884, with James Hannington as the first bishop; however, Protestant missionary activity had been present in the area since 1844, when Johann Ludwig Krapf, a Lutheran missionary, landed in Mombasa. The first Africans were ordained to the priesthood in 1885. In 1898, the diocese was split into two, with the new diocese of Mombasa governing Kenya and northern Tanzania (the other diocese later became the Church of Uganda); northern Tanzania was separated from the diocese in 1927. Mass conversions of Africans began as early as 1910. In 1955, the diocese's first African bishops, Festo Olang'and Obadiah Kariuki, were consecrated by the Archbishop of Canterbury, Geoffrey Fisher, in Uganda. In 1960, the province of East Africa, comprising Kenya and Tanzania, was formed with Leonard James Beecher as archbishop. The province was divided into two, with Festo Olang' being the first African archbishop of the new province of Kenya in 1970. Manasses Kuria was the Archbishop of Kenya from 1980 to 1994. The current archbishop is Joseph Ole Sapit, who is in office since 2016 .

The Anglican Church of Kenya has been politically active throughout its history. As the official church of the colonial power, the Anglican missions enjoyed a privileged position, and Anglican preachers sharply denounced the Mau Mau rebellion in the 1950s. A number of Kikuyu loyalists who rejected Mau Mau were active church members. When President Daniel arap Moi moved to consolidate his power by suppressing free speech and limiting political opposition, Anglican leaders spoke out in defense of civil rights. David Gitari famously denounced election controls in a 1987 sermon that received considerable criticism from Moi supporters, but other church leaders soon joined in Gitari's criticisms. In 1990, Bishops Henry Okullu and Alexander Muge criticized the state's investigation of the murder of moderate foreign minister Robert Ouko. Bishop Muge was killed in a suspicious automobile accident later in the year after receiving open threats from a government official. His death spurred bishops Gitari, Okullu, and other Anglican leaders to take an even more active public role, vocally supporting the move to multi-party democracy. Gitari became archbishop in 1995 and continued the church's active engagement around civil rights, using his position to promote constitutional changes such as term limits and fairer elections.

Why can't you give us a chance to download this book.