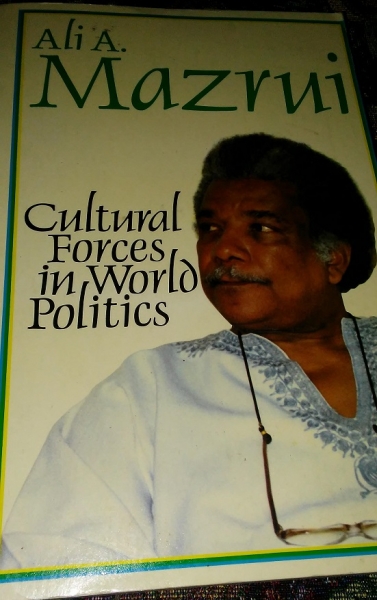 Cultural Forces in World Politics : There is nobody who delights more in the power of culture that Professor Mazrui. The words of these essays move people to arguments and agreements, to fury and delight. They be attention.

Professor Mazrui, Reith Lecturer and presenter of BBC1's 'The Africans', make us reconsider the realities of power in world politics. He argues that the emphasis continues to be on the arms, on resources and on strategic calculations and the importance of culture has been grossly underestimated.

Professor Mazrui's own mind is a cultural cross-roads; he can give Islamic insights to Western audiences about Satanic Verses; he relates the Beljing Spring to Palestinian Intifadah; he compares the effects of Zionism and Apartheid; he puts together Muhammad, Carl Marx and market forces; he tells the Americans that their attitude to the Third World is 'a dialogue of the deaf'; he makes a post -colonial equation of gender and power.

Ali Mazrui provokes his audience to think about fundamentals. His book is not just a diagnosis of the existing world but also a vision of an alternative world. This book demands that people argue about underlying relevance of culture in human behaviour and global politics

Ali Al'amin Mazrui (24 February 1933 – 12 October 2014), was an academic professor, and political writer on African and Islamic studies and North-South relations. He was born in Mombasa, Kenya. His positions included Director of the Institute of Global Cultural Studies at Binghamton University in Binghamton, New York, and Director of the Center for Afro-American and African Studies at the University of Michigan. He produced the television documentary series The Africans: A Triple Heritage.