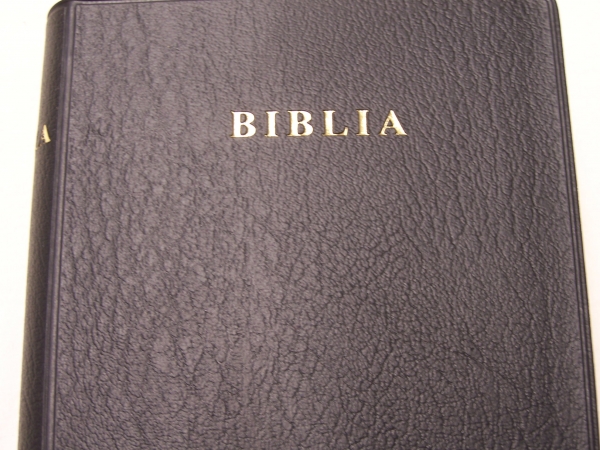 Swahili, also known as Kiswahili (translation: language of the Swahili people), is a Bantu language and the first language of the Swahili people. It is a lingua franca of the African Great Lakes region and other parts of eastern and south-eastern Africa, including Tanzania, Kenya, Uganda, Rwanda, Burundi, Mozambique, and the Democratic Republic of the Congo (DRC).[7] Comorian, spoken in the Comoros Islands is sometimes considered to be a dialect of Swahili, though other authorities consider it a distinct language.[8]

The exact number of Swahili speakers, be it native or second-language speakers, is unknown and a matter of debate. Various estimates have been put forward and they vary widely, from 50 million to over 100 million.[2] Swahili serves as a national language of four nations: Tanzania, Kenya, Uganda, and the DRC. Shikomor, the official language in Comoros and also spoken in Mayotte (Shimaore), is related to Swahili.[9] Swahili is also one of the working languages of the African Union and officially recognised as a lingua franca of the East African Community.[10]

A significant fraction of Swahili vocabulary derives from Arabic[11] through contact with Persian-speaking Muslim inhabitants. For example, the Swahili word for "book" is kitabu, traceable back to the Arabic word كتاب kitābu (from the root k.t.b. "write"). However, the Swahili plural form of this word ("books") is vitabu, following Bantu grammar in which ki- is reanalysed as a nominal class prefix, whose plural is vi-.[12] 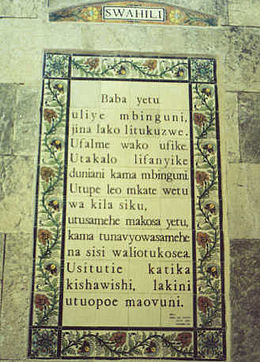 Although originally written with the Arabic script, Swahili is now written in a Latin alphabet introduced by Christian missionariesand colonial administrators. The text shown here is the Catholic version of the Lord's Prayer.[18]

Christian missionaries were the ones that spread the Latin alphabet to the Swahili people. They used it to communicate with the natives, spreading it further.

Since Swahili was the language of commerce in East Africa, the colonial administrators wanted to standardize it.[19] In June 1928, an interterritorial conference attended by representatives of Kenya, Tanganyika, Uganda, and Zanzibar took place in Mombasa. The Zanzibar dialect was chosen as standard Swahili for those areas,[20] and the standard orthography for Swahili was adopted.[21]

Swahili has become a second language spoken by tens of millions in three African Great Lakes countries (Tanzania, Kenya, and the DRC) where it is an official or national language. It is the only African language in the African Union. In 2016, Swahili was made a compulsory subject in all Kenyan schools.[22] Swahili and closely related languages are spoken by relatively small numbers of people in Burundi, Comoros, Malawi, Mozambique, Uganda, Zambia and Rwanda.[23] The language was still understood in the southern ports of the Red Sea in the 20th century.[24][25]

Some 80 percent of approximately 49 million Tanzanians speak Swahili in addition to their first languages.[26] The five eastern provinces of the DRC are Swahili-speaking. Nearly half the 66 million Congolese reportedly speak it.[27] Swahili speakers may number 120 to 150 million in total.[28]