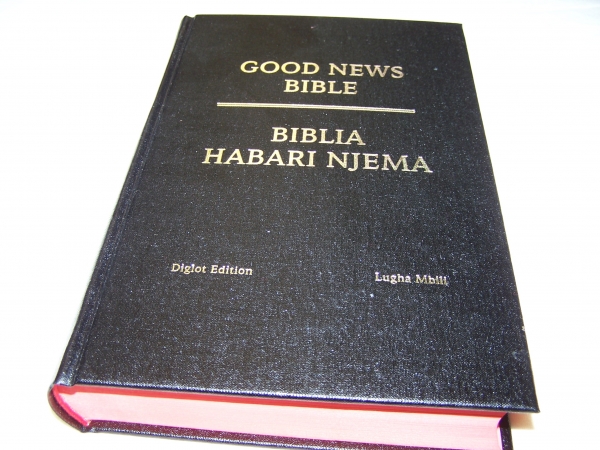 GOOD NEWS BIBLE - BIBLIA HABARI NJEMA : This is the English - Kiswahili dual language Bible, otherwise referred to a the Diglot Edition. It is written to help learners of either language to follow along if the language they are not native to is being used as the primary language. Verse for verse, the bible is written with each verse alongside side each other in both languages. This Bible is out of print. Your donation will help get this bible re-printed and spread the word of God. May God bless you for your generous contribution.

Swahili is a Bantu language of the Sabaki branch. In Guthrie's geographic classification, Swahili is in Bantu zone G, whereas the other Sabaki languages are in zone E70, commonly under the name Nyika. Local folk-theories of the language have often considered Swahili to be a mixed language because of its many loan words from Arabic, and the fact that Swahili people have historically been Muslims. However, historical linguists do not consider the Arabic influence on Swahili to be significant enough to classify it as a mixed language, since Arabic influence is limited to lexical items, most of which have only been borrowed after 1500, while the grammatical and syntactic structure of the language is typically Bantu.